TORONTO, ON / ACCESSWIRE / November 23, 2022 / Cerrado Gold Inc. (TSXV:CERT)(OTCQX:CRDOF) ('Cerrado' or the 'Company') reports its operational and financial results for the third quarter of 2022 ('Q3 2022'). The Company's financial results are reported and available on SEDAR as well as on the Company's website (www.cerradogold.com).

Q3 2022 Financial and Operational Highlights (All numbers reported in US$)

Mark Brennan, CEO and Co-Chairman stated: 'Q3 provided challenges as we integrated new pits, increased strip ratios and incurred increased labor costs. We expect unit operating costs to have peaked with the fourth quarter looking particularity strong and note that production levels are within our range of guidance for 2022. Our heap leach pad construction has commenced and we believe this is the first step towards bringing stronger long term operating metrics to MDN. In Brazil, work continues to upgrade the resources at Monte Do Carmo while feasibility works are progressing as planned.' 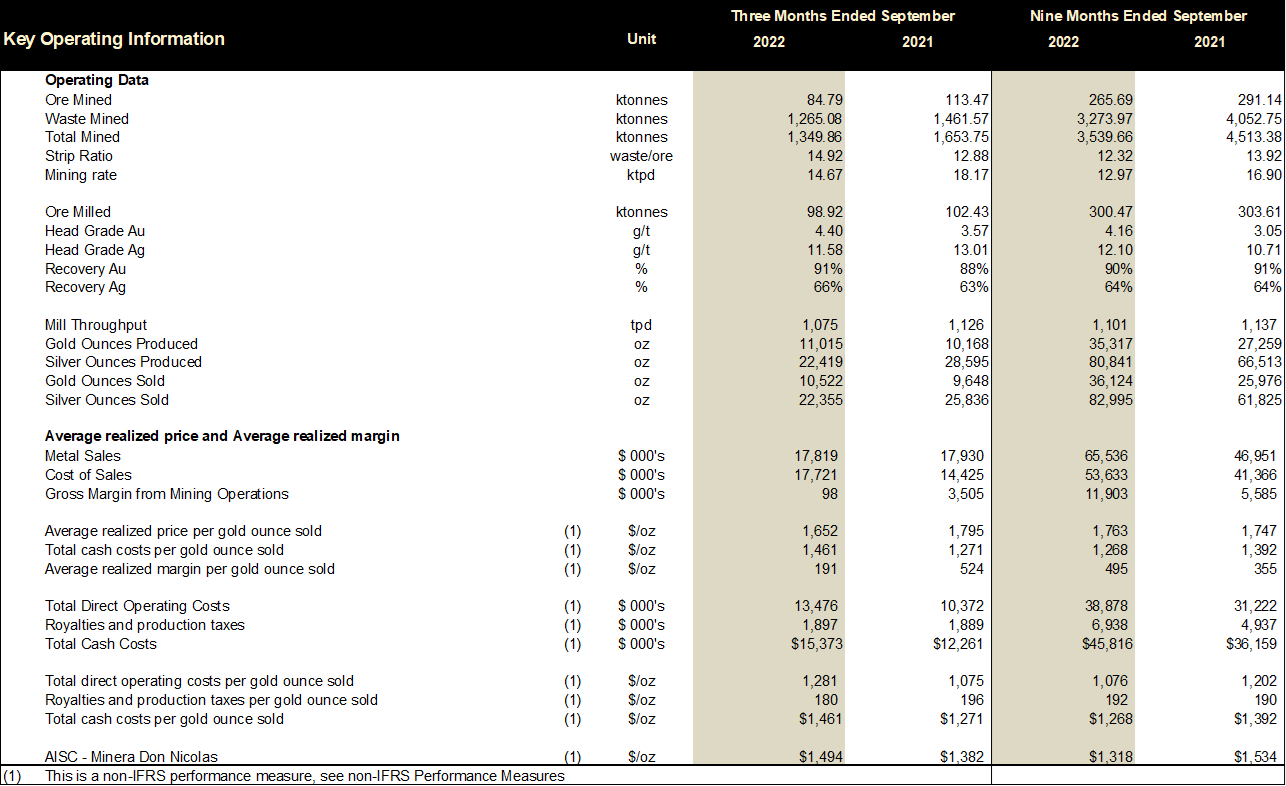 Monte Do Carmo Project
In Brazil, the Company continues to focus on numerous fronts to support the completion of the Feasibility Study ('FS') at Monte do Carmo. Infill drilling continued in the quarter and to November 10th Cerrado completed 26,405 metres as well as 14,174 metres of exploratory drilling and 3,480 metres of sterilization drilling with the use of 5 drill rigs. To date, assay results from 97 complete infill drill holes have been received, and results to date continue to support the conversion of Inferred Resources to the Measured and Indicated resource categories. In addition, four exploratory drill holes to the east of the East Zone at Serra Alta returned anomalous assay grades defining a new mineralized zone called E3. The discovery drill hole FSZ-008 presented a remarkable composite of 13.23m@ 5.53 Au g/t, demonstrating potential expansion of the resource base to the east at Serra Alta. An additional 6,300 meters of drilling were added to the overall 2022 drilling program to target potential areas to expand the Indicated and inferred resources at Serra Alta.

Exploration drilling continues at MDC targeting extensional and satellite zones like Gogo de Onca ('Gogo') and the newly discovered E3 target. The Company announced on November 21 the discovery hole at E3; a 150m step out corridor to the east of the East Zone, that according to preliminary continuity models indicate it could have approximately 250 m of strike length. To date, the Company has received 24 complete drill hole results from the Gogo target. Initial drilling results at the Gogo target are encouraging as the main mineralization controls seen at the Serra Alta deposit are replicated at Gogo. 6,745 meters have been drilled to November 10th. The remarkable results at Gogo include; FGO-004 25.09m@ 3.38 Au g/t, FGO-008 - 12.49m@ 3.39 Au g/t and FGO-12 11.69m@ 5.37 Au g/t. The company will continue to work at Gogo with geological modeling, and has completed a shipment of 115 Kg of mineralized material from core to perform metallurgical test work.

The Company has also completed its Environmental Impact Studies ('EIS') for the Serra Alta deposit at MDC and filed a full report in July 2022 with the local environmental authorities, NATURATINS. After receiving approval from NATURATINS, public hearings will be held with the local community followed by an application for the Preliminary License ('PL') followed rapidly thereafter by the Installation License ('IL').

Other expenses included a $1.1 million increase in finance expense, primarily as a result of the interest expense on the secured note payable which closed in the first quarter of 2022, and interest on the loan payable which closed in the third quarter of 2022, offset by a net foreign exchange gain of $0.1 million during the three months ended September 30, 2022, as compared to the three months ended September 30, 2021.

Basic and diluted loss per share for the three months ended September 30, 2022, was $0.08, compared to the basic and diluted earnings per share of $0.02 for the second quarter of 2022 and a $0.02 loss for the three months ended September 30, 2021, differences are driven by underlying production from the mine as well as a result of higher finance expenses.

Review of Technical Information
The scientific and technical information in this press release has been reviewed and approved by Sergio Gelcich, P.Geo., Vice President, Exploration for Cerrado Gold Inc., who is a Qualified Person as defined in National Instrument 43-101.

About Cerrado
Cerrado is a Toronto based gold production, development and exploration company focused on gold projects in the Americas. The Company is the 100% owner of both the producing Minera Don Nicolás mine in Santa Cruz province, Argentina and the highly prospective development project, Monte Do Carmo located in Tocantins State, Brazil.

At Monte Do Carmo, Cerrado is rapidly advancing the Serra Alta deposit through Feasibility and production. The Serra Alta deposit Indicated Resources of 541 kozs of contained gold and Inferred Resources of 780 kozs of contained gold. The Preliminary Economic Assessment demonstrates robust economics as well as the potential to be one of the industry's lowest cost producers. Cerrado also holds an extensive and highly prospective 82,542 ha land package at Monte Do Carmo.

For more information about Cerrado please visit our website at: www.cerradogold.com.

This press release contains statements that constitute 'forward-looking information' (collectively, 'forward-looking statements') within the meaning of the applicable Canadian securities legislation, all statements, other than statements of historical fact, are forward-looking statements and are based on expectations, estimates and projections as at the date of this news release. Any statement that discusses predictions, expectations, beliefs, plans, projections, objectives, assumptions, future events or performance (often but not always using phrases such as 'expects', or 'does not expect', 'is expected', 'anticipates' or 'does not anticipate', 'plans', 'budget', 'scheduled', 'forecasts', 'estimates', 'believes' or 'intends' or variations of such words and phrases or stating that certain actions, events or results 'may' or 'could', 'would', 'might' or 'will' be taken to occur or be achieved) are not statements of historical fact and may be forward-looking statements.