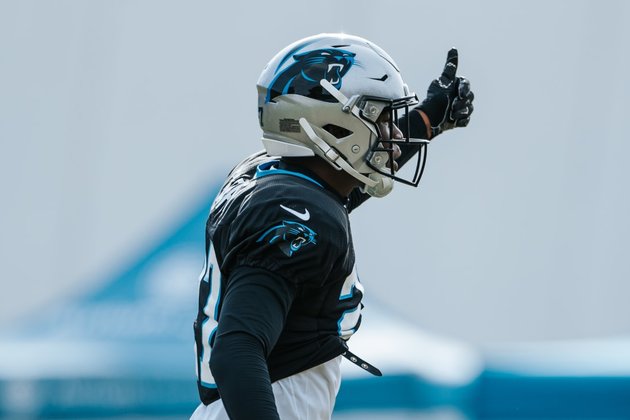 T.J. Carrie has stayed ready for this chance

CHARLOTTE - One of the hardest things for players who have been out of the game for any amount of time is the conditioning challenge of putting the pads back on - those are extra pounds you're not carrying if you're just grinding on a treadmill.

But veteran cornerback T.J. Carrie figured out a way around that problem by continuing to wear them when he was working out back home in the Cleveland suburbs while waiting for the phone to ring. It eventually did on Monday, when the Panthers signed the 32-year-old cornerback to the practice squad.

"That strictly comes from staying in shape and staying ready," Carrie said of being prepared to play in a hurry if they need him. "A lot of the workouts I do back home with helmets on, with pads on, got a quarterback out there throwing to you, going through normal drills. Not going every day because you don't want to be worn out when you get here. But you're going enough to get yourself into shape, so when you get out here, these movements and these bursts are not uncommon for your body.

"It's that old saying, stay ready, so you never have to get ready."

It's one thing to go through full football workouts when you know you're about to go somewhere, but for Carrie, it's been a bit of a leap of faith. Other than a two-week stint on the Ravens practice squad in September, he hadn't been in a locker room since the end of last season with the Colts, which was his eighth NFL season. (The former seventh-round pick of the Raiders in 2014 has played in 118 games with 54 starts.)

That meant a lot of workouts with friends, including the guy he called "my all-time quarterback," Keith Troyer, at high school fields or indoor facilities around the Cleveland suburbs. And while many players just do a lot of weight room work or conditioning during their offseasons, Carrie was out there in his gear. He said they'd be in pads at least three days a week, even if only for 45 minutes to an hour to supplement his other work.

"Wearing pads, wearing helmets, good burst, get a good sweat, that way, your body is accustomed to doing something like that," he said. "Once you get here, now it's just building the tolerance and going for two hours and getting into game shape. It's definitely a process. I think just having the knowledge and experience of being in this league for a while, I've had some good pointers and mentors to lean on."

Two of those are familiar faces to him in his new home, as he played in Cleveland in 2019 under assistants Steve Wilks and Al Holcomb, who clearly thought he could offer something here as the Panthers deal with a rash of injuries in the secondary (cornerback Donte Jackson's out for the year, versatile nickel/safety Myles Hartsfield is doubtful this week with an ankle injury, and safety Juston Burris is out with a concussion).

Wilks referred to Carrie as a "smart player" who could play a number of positions: "Feel like he can pick things up quickly if we need him this week."

Holcomb was equally impressed with his ability to get a handle on the playbook in a hurry.

If the Panthers need him this week, he can be elevated from the practice squad today. But either way, he offers something for a young cornerback room (Jackson was the old one at 26), if only as an example of his ability to dial into a plan quickly.

Carrie flew into Charlotte Monday night, spent Tuesday taking a physical and doing paperwork and watching as much film as he could, and then Wednesday afternoon, he was out there in pads again, a familiar feeling. At his age, he knows nothing's promised to him, so he wanted to be as prepared as he could be when or if the phone rang.

"This late in my career, there are definitely thoughts of staying ready, and eventually, something will come up. As a player, you have to find peace with that," Carrie said. "This league is hard. Sometimes you don't get to decide when you want to leave this league and how long you get to stay in.

"All you can do is count your blessings, stay in shape, and continue to stay ready for the opportunity."