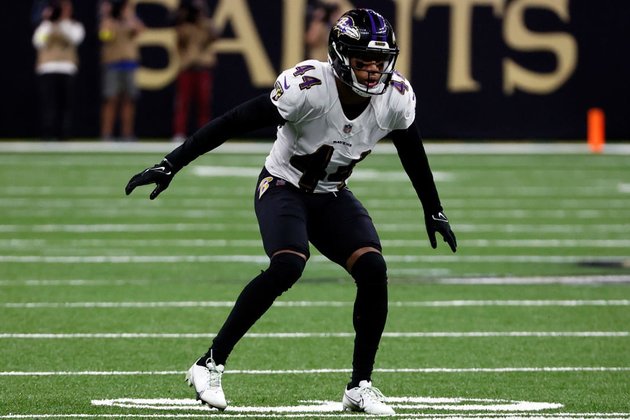 50 Words or Less: Marlon Humphrey Might Be Having His Best Season

The Ravens (6-3) return to action following their bye week to host the Carolina Panthers (3-7) at M&T Bank Stadium.

With the Ravens riding a three-game winning streak, here are my thoughts heading into Week 11, all in 50 words or less:

Marlon Humphrey has been an All-Pro before, but he might be having his best season. He covers, he tackles, he plays inside and outside, he plays every snap, he brings intensity to every practice and game. It's hard to find a cornerback who does more things well.

The Panthers have a pair of talented defensive players in edge rusher Brian Burns and tackle Derrick Brown who are capable of disrupting Baltimore's offense. But Baltimore's offensive line has been outstanding the past few weeks. I think it's up for the challenge.

Speaking of offensive linemen, Morgan Moses was Pro Football Focus' highest-graded Raven in Week 9, Moses has done exactly what he was signed to do, solidifying the right tackle position. He and Ronnie Stanley might be the NFL's best offensive tackle combination.

Crazy that Lamar Jackson will look across the field Sunday and see two quarterbacks who were drafted ahead of him in 2018. Baker Mayfield, who will start Sunday for the Panthers, was the No. 1 pick in the 2018 draft. His backup, Sam Darnold, went No. 3 in the same draft. Incredible.

Since Week 4, Baltimore has the NFL's third-ranked defense allowing just 297.2 yards per game. The Ravens have led by at least 10 points in every game this season, and now they've got a defense playing well enough to protect those leads.

Many events in life have a domino effect. Had Bradley Bozeman re-signed with the Ravens instead of joining the Panthers, the Ravens would not have drafted Tyler Linderbaum. Now Linderbaum looks like he'll be the starting center in Baltimore for years to come.

Kyle Hamilton's strong play over the past few weeks has been impressive after a rocky start. Now he's earning consistent snaps and making plays as a versatile safety who often plays nickel. Having a savvy mentor at safety like Chuck Clark has surely helped Hamilton's growth.

Isaiah Likely figures to be an important piece of the offense even when Mark Andrews returns. Jackson loves throwing to tight ends, Offensive Coordinator Greg Roman loves using them. With Rashod Bateman lost for the season, there's even more opportunity for Likely's role to expand.

The push that defensive tackle Justin Madubuike (3.5 sacks) is getting up the middle has been a key to Baltimore's pass rush. The Ravens, who had 34 sacks last season, already have 27 with eight games left to play. Madubuike has been part of that pass rush surge.

David Ojabo had 11.0 sacks and five forced fumbles in 13 games at Michigan last year. He's a rookie, but he's a playmaker who's already familiar with Defensive Coordinator Mike Macdonald's scheme. Whenever he's activated, Ojabo should make the rush even better.