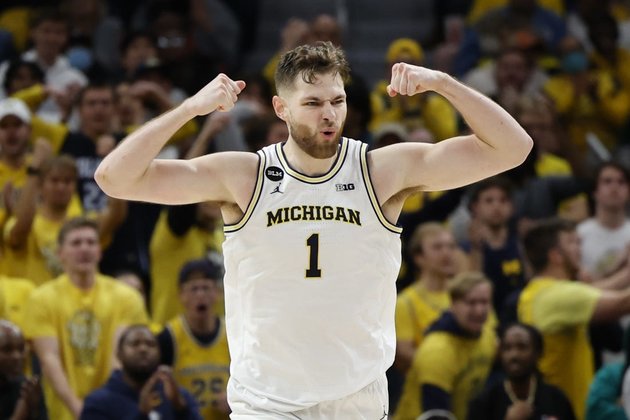 Call it a reality check or a lesson on a season's ups and downs.

Michigan clobbered Pittsburgh by 31 points in the Legends Classic in New York on Wednesday. But in the championship game, the 20th-ranked Wolverines were thrashed by Arizona State, 87-62, on Thursday.

The Wolverines (3-1) will play their third game in five nights when they host Ohio (1-2) on Sunday.

Michigan shot 33.9 percent from the field and made just 4 of 22 3-point attempts against the unranked Sun Devils. Arizona State did whatever it wanted against the Wolverines defense, shooting 60.4 percent and making 11 of 19 3-point tries.

The Wolverines were caught flat-footed from the start, as they never led.

"They looked forward to the matchup. You can just tell with the way the game started," coach Juwan Howard said. "I will say this, I didn't do a really good job of preparing our guys. I'll take full responsibility for this one. Every game is a teachable moment. When you win, you learn. When you lose, you learn. We're going to learn from this and we're going to grow from this game."

The previous game, the Wolverines shot 58.3 percent from the field and had four players in double figures.

"Getting beat like that is pretty embarrassing," Michigan center Hunter Dickinson said. "You don't want to have that kind of wake-up call, but it happened, and I feel like it will level us and kind of bring us back down to earth, that obviously we can't just roll the ball out there and play and expect to win."

Michigan was down 20 points in the first 12 minutes and never recovered.

"They brought the energy. They made shots," Howard said. "Some of the shots were uncontested, which was disappointing, but there were times when they made shots that were contested because of the confidence level that they had."

Dickinson leads the Wolverines in scoring (19.5 points per game) and rebounding (7.8). The only other player averaging double figures is Howard's freshman son Jett (14.8).

The Bobcats opened the season with one-point loss to Belmont. They recorded an 11-point victory over Cleveland State, then fell to Detroit Mercy 88-74 on Wednesday.

The Titans shot 51.7 percent, which doesn't bode well for an Ohio team about to face its first ranked opponent this season. The Bobcats shot a respectable 45.3 percent but only made 6 of 26 3-point attempts.

They were down by 22 points with 11 minutes remaining.

"Obviously, we didn't play well enough to win the game," Ohio head coach Jeff Boals said. "We got off to a good start. We were doing what we wanted to offensively with the basketball with reversals post touches. But there was a stretch there where we got away from that."

The game on Sunday is a rare matchup between the programs. They've only played once since 1971 -- a 2012 Bobcats win in the NCAA Tournament. Michigan leads the all-time series 3-1.