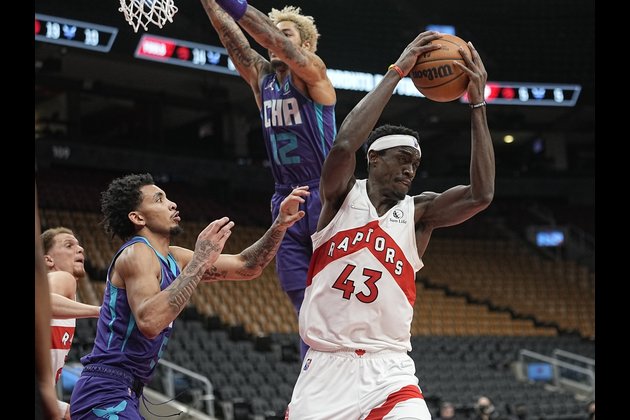 Pascal Siakam recorded 24 points and nine rebounds and matched a career best with 12 assists as the Toronto Raptors defeated the visiting Charlotte Hornets 125-113 on Tuesday night.

Gary Trent Jr. scored 14 of his season-best 32 points in the third quarter for the Raptors, who won for just the third time in the past eight games. OG Anunoby added 24 points, Chris Boucher 12, Malachi Flynn 11 and Dalano Banton 10.

LaMelo Ball scored 25 points for the Hornets, who lost their second straight after winning three in a row. Miles Bridges added 22 points, James Bouknight had 18 and Terry Rozier and Mason Plumlee each had 12.

Charlotte's P.J. Washington and Toronto's Justin Champagnie were ejected with 1:46 left in the first quarter for scuffling.

Toronto had a 19-point advantage, 105-86, heading into the fourth quarter.

The Raptors led 39-27 after one quarter.

After the Hornets moved to within 10 points, the Raptors regained an 18-point margin when Precious Achiuwa hit a 3-pointer with 4:47 remaining in the second quarter.

Charlotte cut the deficit to 11 on two free throws by Bridges with 1:17 to go, but Flynn's jumper gave Toronto a 76-61 lead at halftime.

The lead reached 16 on Trent's 18-footer with 1:05 left in the quarter. Trent then made four free throws -- including a technical -- before Ball beat the buzzer with a 3-pointer. Toronto led 105-86 after three quarters.