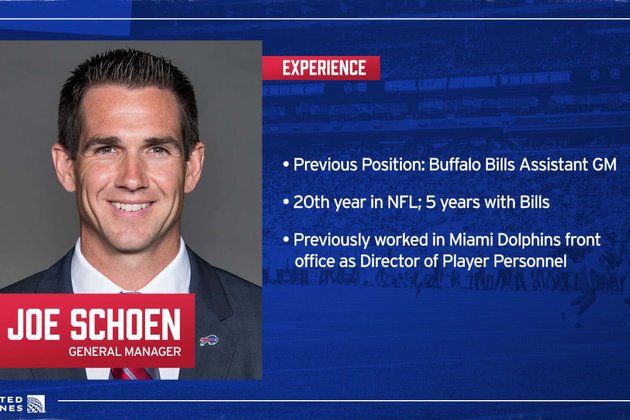 1. Schoen (pronounced "Shane") had served as the assistant general manager of the Buffalo Bills since 2017. Buffalo made the postseason four out of his five seasons after the franchise hadn't made it since 1999. The Bills, who are back-to-back AFC East champions, are currently preparing for their Divisional Round game against the Kansas City Chiefs in a rematch of last year's AFC Championship Game.

2. Schoen, 42, has 20 years of scouting and executive experience in the NFL. Prior to joining the Bills in 2017, he had been in the Miami Dolphins front office for most of the previous decade, serving the last three as the director of player personnel.

3. Schoen spent the 2013 season as the Dolphins assistant director of college scouting after serving the first five years with Miami as one of the team's national scouts. Additionally, he led Miami's preparation, assessment and acquisition of potential professional and collegiate free agents. He spearheaded NFL draft preparations, including evaluation and draft board construction while also serving as a key liaison between the coaching staff and personnel staff.

4. His first NFL job was as a ticket office intern with the Carolina Panthers in 2000. He then spent seven seasons (2001-07) working for the Panthers under current Bills general manager Brandon Beane, first as a scouting assistant and then as a southeast and southwest scout.

5. The Indiana native graduated from DePauw University in 2001. A communication major, Schoen was a three-year letterman in football (1997-2000). He played quarterback as a freshman and wide receiver his final three years, serving as a captain during his senior season.