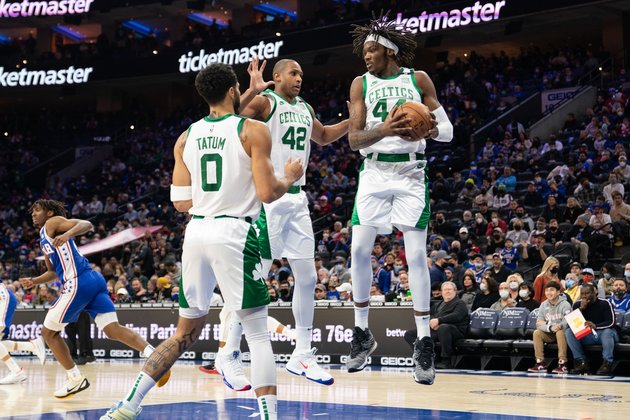 The Boston Celtics' lack of consistency remains a concern as the team concludes a four-game homestand Friday against the Portland Trail Blazers.

Boston has won five of its last seven games to even its record at 23-23, but the team again struggled for extended periods in Wednesday's 111-102 loss to the Charlotte Hornets.

"We've got to find some consistency from night to night," guard Jaylen Brown said. "It can't be one night you play well and then the next two nights you chill. Everybody's got to come every single night ready to play. Be prepared, be consistent, be professional."

Brown is averaging 24.1 points for the Celtics, who are hoping to have forwards Marcus Smart and Robert Williams back in the lineup against Portland.

The 6-foot-8 Williams is known for his shot-blocking ability, but the Texas AM product has evolved into a complete player in his fourth season.

"I think the guy that just keeps ascending is Rob Williams," Boston president of basketball operations Brad Stevens said. "I'm so encouraged by his progress. When people talk about guys that are about the team, guys that only want to win, that usually you know exactly what you're getting, I think that Rob is at the top of that list."

The Celtics are looking for a repeat of their last matchup against the Blazers, a 145-117 victory in Portland on Dec. 4. Jayson Tatum and Dennis Schroder led Boston with 31 points apiece in the win.

Schroder scored 24 points in Wednesday's victory over Charlotte and for the past three games is averaging 21 points (nearly five full points above his season average) on 58.5 percent shooting, with 6.0 rebounds and 7.3 assists.

Portland has won four of its last six games but faded in the fourth quarter of Wednesday's 104-92 loss to the Miami Heat. Tied after three quarters, they managed just 12 points in the fourth.

Anfernee Simons continued to impress with 27 points and seven assists against Miami, while CJ McCollum added 24 points in his second game following a six-week absence due to a lung injury.

Portland is just 4-15 on the road and will need another strong outing from center Jusuf Nurkic, who has recorded three successive double-doubles.

Nurkic is averaging 14.0 points and 10.7 rebounds on 53.9 percent shooting this season, and in the past three games has averaged 20.7 points and 16.7 rebounds. He has played especially well since missing just over a week of action at the end of December while in the COVID-19 protocol.

"I think I'm having one of the best seasons in my career," said Nurkic, in his sixth season as a Blazer of an eight-year NBA career.

"Just because all the drama happened, and injuries and COVID, I think personally, percentage-wise and whatever-you-look-at wise, I think I've had one of my best seasons in Portland."

The Blazers have also received a spark from third-year forward Nassir Little, but he is listed as day-to-day after exiting Wednesday's game with a right knee contusion. Little has averaged 11.2 points and 5.9 rebounds since moving into the starting lineup in December.

With Little out for the second half, Robert Covington recorded his first double-double of the season with 11 points and 12 rebounds in 38 minutes.